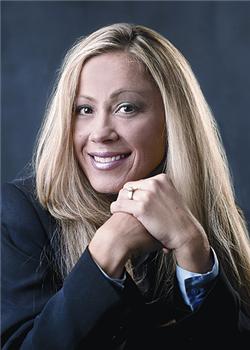 Biggest achievement: Becoming the first woman and first Hispanic to be elected principal and name partner in her law firm.

Current goal: To gain Midwest regional visibility for her law firm in the health care provider sector, while at the community level contributing to better provision of mental health services.

Monica Navarro was not yet 18 and spoke little English when she came to the U.S. from Colombia. Six years later, she had finished undergraduate work at Florida International University and earned admittance to the University of Michigan Law School, where she finished at the top of her class.

Navarro has successfully combined a law career with raising a family.

She started practicing law at a major Wall Street firm and then moved to a Chicago firm. She returned to Michigan, worked at a large law firm and then was a law clerk for U.S. District Judge Julian Cook for two years.

For about three months of her law clerking, Navarro said, she had to manage bringing her infant daughter and a baby-sitter to the judge's chambers, because she needed to nurse the child.

Later, she would join Frank, Haron because she felt a smaller law firm would allow a better balance between career and family, said Navarro, who with her husband, Mark Crane, also a lawyer, has a son and two daughters.

Much of her work has been in the area of complex fraud litigation called "qui tam." This is a legal term associated with whistleblower laws, where an individual can bring an action against a violator accused of cheating the government, and the whistleblower can collect up to 30 percent of the amount recovered.

Among her recent successes were: The 2005 arbitration of a commercial contract dispute between Southfield-based Med-Advantage and Encore Marketing; and serving as counsel in one the top three medical fraud and abuse monetary settlements in Michigan in 2004 - Mary Scott v. Metropolitan Hospital in federal court in Grand Rapids.

Navarro was elected as a principal member and name partner of her firm Jan. 1, 2004.

She also was recently appointed to the Michigan Board of Psychology and recently won the Oakland County Women's Bar Association Work-Life balance award for her firm.